Anyone that commutes on 426 from Oviedo to Geneva or Geneva to Oviedo knows how dangerous that commute can be.   Last Tuesday there was a terrible accident at Walsh and 426 around 7:40 AM.    The road was shut down.   Anyone who passed the aftermath once the road re-opened probably cringed.

The simple fact is this accident was avoidable.   The line of sight for commuters turning off of Walsh on to 426 was blocked by overgrown vegetation which prevented Northbound traffic from knowing someone was turning southbound.   Couple that with the fact the only passing lanes on 426 as you travel Northbound out of Oviedo starts within 500 feet of the intersection of Walsh Street and 426, an impatient motorist, disaster was inevitable.

The vegetation was part of the Problem.   So we at Paramount Fencing solved that part of the problem.   We contacted the property owner, and with their permission 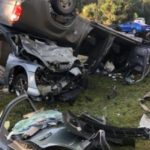 and full cooperation, have removed all vegetation which prevents northbound traffic from knowing a car is turning off of Walsh on to 426 at no charge.    If you know of a similar problem on 426, contact us, and we will remove that vegetation free of charge.

In the meantime,  here is where we need your help.   We need the people to contact District Two Seminole County Commissioner and request that the passing lanes on 426 before and after Walsh Street be eliminated.   We know it sucks, but there are no passing lanes on State Road 46 between Geneva and Oviedo on SR 426 with the exceptions of Walsh, Murphy, and Marsh Streets.    All of these passing lanes are within 500 feet of those intersections.  Understand, these once dirt roads are now paved and are popular short cuts.

We are asking for your help because one of the vehicles has a mom and three kids involved.   Next, the local bus stop for Geneva Elementry is located where the two cars came to rest.   Understand, the buss normally picks those kids up at 7:45 AM.   Just a reminder the accident happened at 7:40 A.M.  This could have been much worse.

Thanks for your help, Oviedo and Geneva.  Lets drive save. Lets Fence Safe..

Does Oviedo Require a Permit to Build a Fence?
What to Consider When Selecting a Fence in Oviedo, Winter Springs, or Geneva Florida
Before You Spend That Tax Refund On A Fence
Post Views: 481