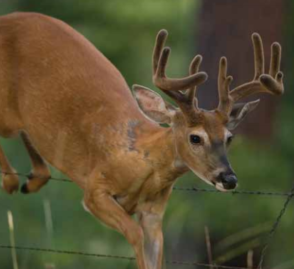 Fencing With Wildlife in Mind

Seminole County, Florida is one of the few places in Central Florida left that still has expansive wildlands. Across the county, you can find wetlands, pastures, farms, forests, hammocks, and many other diverse ecosystems. This natural beauty is what draws many to this region, but it is an ongoing battle to keep Seminole County natural.

One of the pressing issues that Oviedo and Geneva face is urban sprawl, which is described as the uncontrolled expansion of urban areas. Take a drive through Orlando, and you will see this. Apartments being built all along Highway 50, subdivisions popping up by the dozens. This rapid expansion is pushing more and more into Seminole County.

When wildlands are sold for developments, wildlife needs to find new homes, which are often the properties of residents in Oviedo and Geneva, those homeowners who have large pieces of land. It is not unusual for a landowner to want to keep deer, wild hogs, bears, or other wildlife off their properties, but sometimes a land barrier can be dangerous to animals, including your own. This article will cover how to choose the best fence for your needs that will be safe for wildlife.

Many agricultural fences are constructed using high-tensile wire or barbed wire, which is usually safe for livestock but can be deadly for wildlife attempting to clear a fence line. Many times, deer trying to jump a fence will get tangled in woven wire or snagged and caught on barbed wire. This results not only in a slow death for the animal, but a messy cleanup and costly repair for the homeowner. Unfortunately, this scenario is extremely common.

Researchers at Utah State University completed a wildlife mortality study along 600+ miles of fence in both Utah and Colorado and studied which fence type is the most problematic for wildlife.

The findings were that on average, one ungulate per year was found for every 2.5 miles of fence due to being snared and entangled. Most animals (69% of juveniles and 77% of adults) died from getting caught in the top two wires while trying to jump over a fence. They also concluded that juveniles are 8 times more likely to die in a fence than adults and that woven wire fences with a top wire made of barbed wire were the most lethal fence type.

Another issue that researchers found with fences is that they often blocked wildlife from crossing and left many young ungulates blocked and stranded. 90% of carcasses found dead next to, but not in the fence, were fawns who were most likely separated from their mothers due to their inability to cross a woven wire fence. Had there been a 16-inch space between the bottom wire and the ground, they would have been able to slip under. It is important to use a smooth wire on the bottom wire so that wildlife who crawl under do not get snagged. A cut from barbed wire can become infected and be lethal to wildlife.

Fence posts were also found to be an issue. Many landowners use open vertical pipes for line and gate posts and have earned the name “death pipes”. This is because open vertical pipes have been found to be silent killers of birds, reptiles, and small mammals who are looking for a safe nesting area. Once in the pipe, it is almost impossible to escape up the smooth sides. To prevent this, fill pipes with concrete or use caps to cover any open pipes.

Another safety concern is the visibility of the fence. This is especially important if you live near grasslands or marshlands. Many times, low flying birds will not see a wire fence and become entangled and unable to escape. Seminole County is home to a handful of endangered species, including two large low-flying birds, the Sandhill Crane and the Wood Stork. These are federally protected birds that face danger if they cannot see your fence lines. A ranch rail style fence is visible, but wire fencing is not always.

To fix this, add a top board to your fence line (just make sure the fence is still shorter than 42 inches!) or, for a more affordable option, run the wire through a PVC pipe for a highly visible line, or simply flag the fence line.

You may be thinking, “Do I really need a fence? Or can I just use boundary markers?”. Many times, using boundary markers can be less expensive to install and maintain long term. They can be as simple as short posts in the ground with no wire between, or hedgerows. If you choose to do a hedgerow, make sure that the species you choose is not an invasive species. Invasive species will often overgrow and become difficult to handle.

If you need to use an exclusion fence, be sure to not fence in large areas that include wildlife habitats. For any fence type, place gates in the corners of the fence lines. Trapped animals are more likely to find the exit if it is in a corner. Deer exclusion fences should be a minimum of 7 feet tall, made with woven wire. Add a top rail for added visibility.

Making some of these minor changes will not only benefit wildlife but landowners as well. Visible or covered wire lowers the chance of an animal to get caught in the fence, damaging sections at a time. The guidelines don’t just apply to wildlife, livestock often get stuck in fencing as well. Remember that a wildlife-friendly fence is often low cost, and saves money long term by reducing future fence repair. Consider your options today.

Does Oviedo Require a Permit to Build a Fence?
Barbed Wire - Fencing the West
Types of Field Fences
Post Views: 378

Fencing on Lakes in Seminole County